What do you get when you combine the following…

– A bunch of cool kids and wine aficionados.

You get a riot, a Wine Riot to be precise. 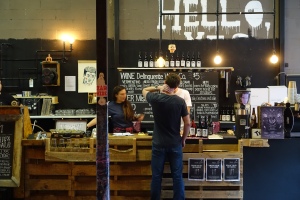 Sure, instead of Austria we were in Eliza Street, and I’m certainly no Von Trapp – but in the tradition of that old ditty, these are a few of my favourite things.

On Saturday night Hello, Yes played host to an event put on by Delinquente Wine Co showcasing the work of their 2014 vintage. On offer at the cracker price of $5 a glass (or $30 a bottle) you had the choice of: Screaming Betty – a Vermentino, Pretty Boy – a Nero D’Avola Rosato, The Bullet Dodger – a Montepulciano and finally Roxanne the Razor – a Nero D’Avola & Montepulciano blend (75%/25% respectively) which was launched that night. 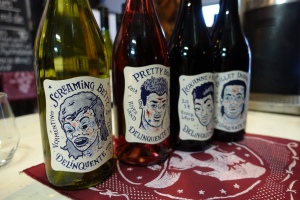 Winemaker Greg Grigoriou says of the brand that “the philosophy behind the business is that the Riverland can produce awesome wines if we grow grapes that are sustainable and suited to the environment, and we can craft wines with minimal intervention where we let the amazing fruit do the talking.”

Using locally grown grape varieties from southern and central Italy, Delinquente wines are organic, vegan friendly and affordable. Also, in my opinion they have some of the coolest labels and branding going around.

If you were in the mood to transition between wine and beer, South Australian locals Mismatch Brewing Co were also in attendance, slinging their hoppy hero’s – Session Ale and Archie’s Red Ale.

While the drinks were the focus of the event, booze is best served with beats. The night started off with a DJ set from Nelson Dialect followed by the soulful sounds of Abbey Howlett and the Golden Realm. 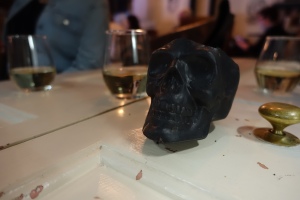 Food was brought to you by the Hello, Yes kitchen. Being that I can rarely go past anything involving salty, squeaky cheese – the haloumi salad was the winner for me, although the chorizo burger was a favourite amongst friends.

Wine Riot was a fantastic event put together by a group of people all destined to do great things in South Australia and not a bad way to spend a Saturday night in the city. 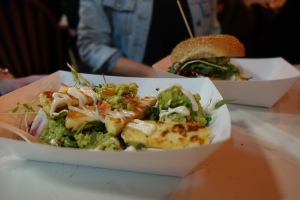 One thought on “WINE RIOT”