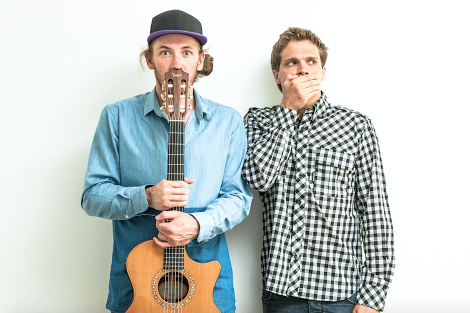 With the disclaimer that I am not at all a stalker but merely an enthusiastic fangirl, I sometimes feel like in a way I’ve been lucky enough to ride along for the journey of the extraordinary talented men that are Jamie MacDowell and Tom Thum.

Now I’m likely to get my timelines mixed up a little here. Every Adelaide Fringe for me is generally a blur of late nights and drunken dance floors and sometimes they all blend together but I’ll do my best.

I first witnessed the vast array of talents from Tom Thum back in 2010 as part of a larger scale production called Tom Tom Crew. Acrobatics, live drumming and the like. Tom’s beatboxing absolutely blew my little mind and the following year I went along to see his solo show. Again, crazy good.

How one man can make so many noises, voices, sounds and songs out of just his face continues to baffle me.

Jump forward a year or two and on one of those aforementioned late nights on a drunken dance floor, I was lucky enough to see Tom Thum jump on stage with his mate Jamie MacDowell during one of the awesome little teaser performances you get at Fringe Club/Artist Bar.

The following year I saw their first joint show at a small venue at the Garden (I can’t remember which). This year, with five shows only, they have packed out the 300 person capacity Menagerie tent at Royal Croquet Club.

Tom puts you in a 1930’s jazz bar, then takes you to a grimy club listening to drum and bass.

The banter between the boys is effortless. They’re funny, cute and even when they made a few little fuck-ups, it was totally endearing and almost made the show more enjoyable for it.

Most of the show is the two of them performing together, however for a few tracks they split up and spoil the audience with their talents individually.

There was a special surprise guest, an Adelaide favourite. I won’t tell you who, but it was bearded brilliance.

They’re the hilarious boys wearing snapbacks that you want at your house party, they’re the guys everyone in the audience couldn’t help but have a little swoon over. Apart from one particular song where I actually teared up, (a song Jamie has dedicated to his best friend Nicolette) I had a grin from ear to ear the whole time and didn’t want it to end.

I’m late to the party posting this, so there’s only 2 shows left. If you don’t make it this time around, no doubt the boys will be back again. Even bigger and better.