Steph in the City – A name which came about as a bit of a play on words from Sex & the City. A little TV show about a single girl and her romance with the city she loves. I too love my city, and although it’s not quite the city that never sleeps, (‘cause let’s be honest, it does) and it’s not the size of Manhattan, there’s a whole lot going on in this town right now and I’m loving being a part of it all.

I thought for a while that after a visit to the Big Apple that New York City had my heart, but Adelaide – you stole it back.

I previously lived in the South West corner of the city with a partner for a number of years and after a break-up and a brief stint back in the ‘burbs with the parents, I was lucky enough to be in a position to buy my very own piece of Adelaide in the form of an Ergo apartment.

Ergo is a new housing development in the inner city, a stones throw away from the Central Markets in one direction, the South Parklands in the other.

On December 6th 2013, my life changed when I picked up my keys. On that day I made a promise to myself that I would make the most of my new city lifestyle and do my very best to ‘get amongst it’ – Quote unquote.

The definition of ‘it’ in which I am getting amongst involves a number of different things. For the last year or so I have been immersing myself in the best our city has to offer in terms of eats and drinks (new and established), heading to as many events as possible and exploring the city in all its nooks and crannies.

My liver has seen better days, and my bank account has taken a beating, but my goodness, I’ve had fun.

In the past few months we’ve seen our Facebook pages explode with the sharing of stories of Adelaide being rated as one of the ‘top 10 cities to visit’ from Lonely Planet and Wotif.com. We’ve even had the odd comparison to the United States resident ‘hipster’ city Portland – for our love of food, coffee, booze, street art, bikes, music, markets, food trucks and festivals.

When I think about the positive changes we’ve seen in recent years in Adelaide, there are a number of things in particular that come to mind…

We do great food. We have exceptional wine. We love art. We love music. We love festivals.

We’ve seen the Adelaide Oval and riverbank re-development and although I’m not a sports fan, it’s pretty glorious. Watching a sea of supporters flood through the city streets prior to a game definitely creates a vibe of excitement and community no matter which team you may be going for.

We’ve seen the introduction of small bar licensing and our laneways and side streets filling up with hole-in-the-wall establishments full of beautiful people, bangin’ food and even sexier drinks. There are currently 28 such licenses in operation and word on the street (press) is there’s another 13 pending approval. We’ve seen the Adelaide City Council dish (mind the pun) out 40 permits to allow food trucks of all shapes and sizes to serve us their tasty treats made with love and with inspiration from around the world.

We’ve seen the Fringe Festival and Adelaide Festival get bigger and better year on year. 2014 bringing record number of ticket sales for the Fringe at nearly half a million. We’ve lined up for an hour to walk through and make our offering to the shrine of Barrio, acquainted ourselves with that sassy broad Lola and partied in her Pergola, eaten chips from a cone whilst grabbing a last minute show ticket in the Garden of Unearthly Delights; and we’ve had every intention for a cheeky game of croquet at the Royal Croquet Club yet somehow been distracted with jugs of Pimms.

We’ve seen Renew Adelaide work magic with under utilised city spaces, providing the support of bricks and mortar to young entrepreneurs of different creative backgrounds as well as bringing life back to somewhat neglected places such as Regent and Adelaide Arcade. We’ve heard the phrase ‘pop-up’ used to the nines.

Splash Adelaide have worked hard to create and support events ranging from family friendly shindigs such as Fork on the Road or A Little Day Out, through to Laneway Learning where for a mere $12 a pop you can go hang in a city laneway and learn about anything from the basics of wine tasting (enough to drop a few boozy buzz words for your day trip down to the ‘Vale) to macramé making, ukulele playing and the art of vertical gardening.

I challenge anyone to a duel if they try to tell me there’s nothing to do in this town.

Adelaide has had a bad wrap in the past. I get that.

Sure, it gets bloody hot. Our public transport system kind of sucks and well, we’re a bit murdery (we’ll never drop that whole Snowtown ‘incident’). We’ll probably forever be compared to Melbourne and it can get a tad socially incestuous but there’s a whole bunch of gurus doing amazing things in this town right now and there’s a real buzz that it has no intention of slowing down.

With this blog I look to share my love affair with Adelaide from the perspective of a girl on the business end of her twenties and help spread the work of the incredibly talented and creative people who every day contribute to allowing Adelaide to shake it’s long outdated nickname of a ‘big country town’. 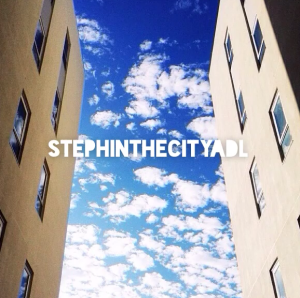 Follow the link to have a peek into a year in Adelaide so far.